With the start of the implementation of the WebRTC API around 2012, javascript developers gained access to the video and audio streams coming from webcams and microphones. This paved the way for augmented reality (AR) applications that were build solely with web technologies. Using webtechnologies for AR is also called “the augmented web”.

Most AR applications use a webcam feed that gets analyzed for certain patterns, for instance a simple color field, a movement or a marker. Nowadays there are several other ways to augment the reality of a webpage, for instance using geolocation or devices such as the Leapmotion.

In this post I will focus on AR with markers.

While some developers have created their own AR libraries, most developers use either JSAruco or JSARToolkit. Both libraries are javascript ports from ancient C++ libraries. JSAruco is based on OpenCV and JSARToolkit is a port of ARToolkit via the in-between ports NyARToolkit (Java) and FLARToolkit (Actionscript).

The inner-workings of the libraries is as follows: a snapshot of the video feed is taken by copying image data from the video to a canvas on every animation frame. This image data gets analyzed for markers, and the position and rotation of every detected marker is returned. This information can subsequently be used to render a 3D object on top of the video feed, thus augmenting the reality.

Three.js works very well with both JSAruco and JSARToolkit and I made 2 simple examples that show you how to use the libraries with Three.js, the code and some markers are available at Github. 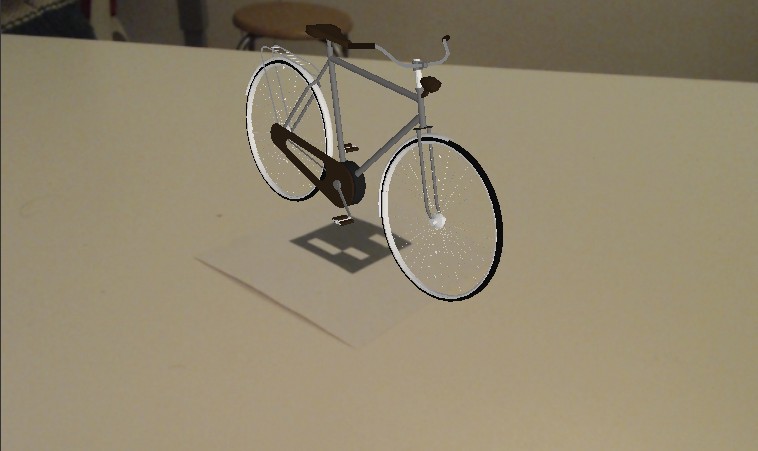 3D model rendered on a marker

Note that JSAruco markers can not be used with JSARToolkit; you have to use the markers that you can find in the repository on Github, in the markers folder.

Both libraries support multiple markers, which means that each distinct marker gets its own id, and this id can be used to couple a model (or an action) to a specific marker.

For instance I made this small test using multiple markers:

In the process of analyzing, the image is turned into an inverted plain black and white image. This means that a pixel is either white or black and this makes it very easy to detect a marker. For the best results, good bright lighting is mandatory. Also putting the marker on a surface with a plain color is recommended. If possible, using backlight is ideal. In general you should turn off the auto focus of your webcam. 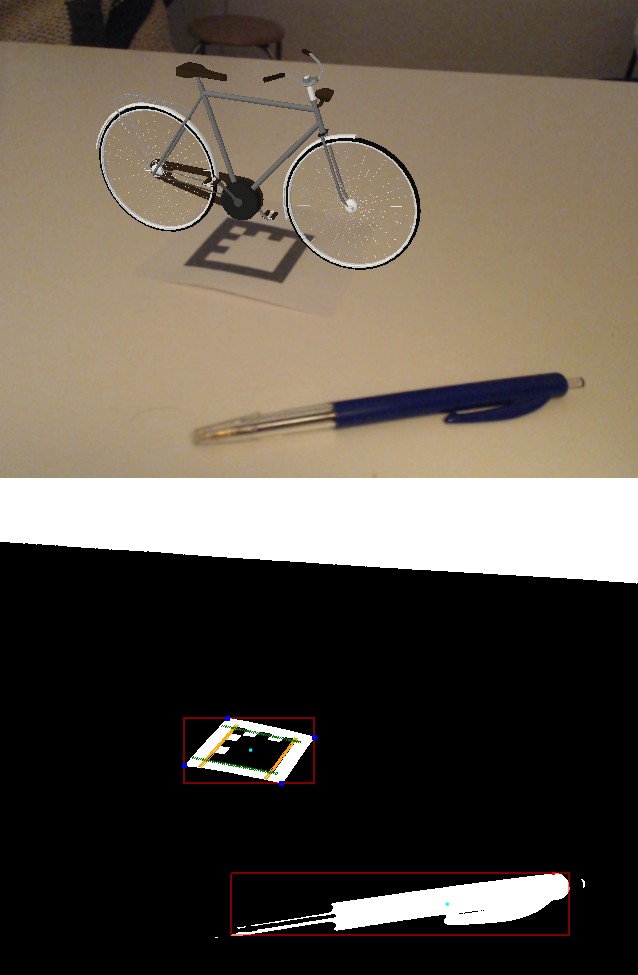 In general JSARToolkit performs better than JSAruco, but both libraries suffer from missed or wrongly positioned markers, resulting in an unsteady presentation. You can compare both libraries yourself using the simple test applications that I mentioned earlier. Code is at Github.

On iOS you don't have access to the streams coming from a camera or a microphone due to restrictions put in place by Apple. So on this platform it is impossible to create an AR application with only web technologies. Since mobile devices have become ubiquitous, you see an increasing number of native AR libraries for mobile platforms appear on Github, especially for iOS.

The advantage of using web technologies is obvious: it is much simpler to set up an application and it runs on any platform (iOS being the sad exception).

The lesser performance is partly because analyzing the image data is done in the main javascript thread, and partly because the lack of control over the camera settings which leads to a poor quality of the incoming feed, for instance due to bad or fluctuating light conditions.

On the short term using webworkers may improve the analyzing and detection step, and on the longer term the ever improving performance of browsers will eventually lead to a more reliable marker detection.

Furthermore Web API's keep evolving so in the near future we might get more control over the camera settings via javascript. The draft version of the MediaCapture API already shows some useful future capabilities. Also there is a draft Web API for the light sensor that is currently only implemented in Firefox.

The future of the augmented web looks bright.